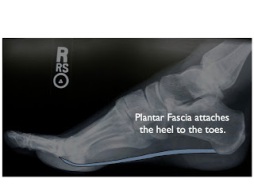 A heel spur occurs when calcium deposits build up on the underside of the heel bone, a process that usually occurs over a period of many months. Heel spurs are often caused by strains on foot muscles and ligaments, stretching of the plantar fascia, and repeated tearing of the membrane that covers the heel bone. Heel spurs are especially common among athletes whose activities include large amounts of running and jumping. Heel spurs often cause no symptoms but can be associated with intermittent pain, especially while walking, jogging, or running. Sharp pain in the heel can also be experienced when standing after sitting for a long period of time. Heel spurs can be a result of plantar fasciitis.

When a bone is subjected to pressure, rubbing, or other stress over long periods, it tries to repair itself by building extra bone. This extra bone is what is referred to as a ?spur?. Many form as part of the aging process when cartilage breaks down in the joints.

Major symptoms consist of pain in the region surrounding the spur, which typically increases in intensity after prolonged periods of rest. Patients may report heel pain to be more severe when waking up in the morning. Patients may not be able to bear weight on the afflicted heel comfortably. Running, walking, or lifting heavy weight may exacerbate the issue.

Diagnosis of a heel spur can be done with an x-ray, which will be able to reveal the bony spur. Normally, it occurs where the plantar fascia connects to the heel bone. When the plantar fascia ligament is pulled excessively it begins to pull away from the heel bone. When this excessive pulling occurs, it causes the body to respond by depositing calcium in the injured area, resulting in the formation of the bone spur. The Plantar fascia ligament is a fibrous band of connective tissue running between the heel bone and the ball of the foot. This structure maintains the arch of the foot and distributes weight along the foot as we walk. However, due to the stress that this ligament must endure, it can easily become damaged which commonly occurs along with heel spurs.

There are both conservative and surgical heel spur treatment options. Because the heel pain caused by heel spurs is symptomatic of inflammation, the first step is to ice the area in hopes to reduce the inflammation. The next step is to see our orthopedic specialist to prescribe an appropriate treatment plan. Some conservative treatment options might include Anti-inflammatory medications. Shoe orthotics. Shoe inserts. If conservative treatments are not working, surgery may be required to remove the heel spur. As in all cases of heel pain, it is important to see an orthopedic doctor who specializes in foot and ankle pain.

Surgery to correct for heel spur syndrome is a common procedure which releases plantar fascia partially from its attachment to the calcaneous (heel bone). This part of the surgery is called a plantar fasciotomy due to the fact the fascia is cut. This is most often done through an open procedure as any heel spur or bursa can be removed at the same time. If the spur is not removed during the surgery, it will probably be just as successful, as the large spur is not the true problem. Some physicians use an endoscopic approach (EPF) where a small camera aids the physician during surgery with typically smaller incisions on each side of your foot.